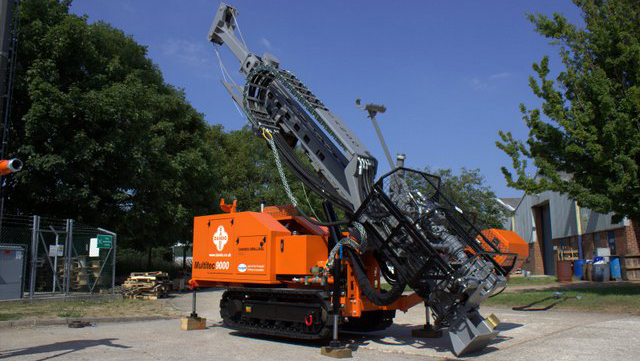 Commenting on his choice of a Dando Multitec 9000 drilling rig, Cam Wiebe of Anderson Water Services says, “While the bread and butter of our business is drilling water bores, these days it is important for drill contractors to have versatile equipment that can be used for work in other sectors. The Multitec 9000 provides us with that option.”

In fact the new rig, delivered to Anderson Water in 2014 was immediately put to work, not on a water well project, but exploring for coal in British Columbia.

“The terrain and geology were difficult,” describes Wiebe. “Access was limited and we were often drilling in forest where we had to ensure the environment was protected as much as possible.”

The Multitec 9000 is perfect for such situations. With a width of only 1.4m when tracking and 2.2m with the feet deployed for stability when drilling, the track mounted version of the rig used by Anderson Water Services can easily navigate between trees in forested areas with very little disturbance to the surroundings.

Remote operation ensures an additional safety factor by keeping the operator a distance from the rig while tracking. This is particularly useful when drilling on sloping terrain.

“We have already drilled over 20 bores to 100m plus with the rig,” explains Cam, “most of these were open holes using a compressor and DTH hammer.  The geology is varied and can be tricky and every hole had at least 20m of conglomerates.

We were also drilling on some very steep inclines of up to 55 degrees.”

The Dando rig handles the sloping terrain well as it is equipped with a hydraulic mast dump which allows for drilling at angles between 45-90 degrees, and a steel tracked crawler unit and Caterpillar engine provide the power and traction required to negotiate the sometimes difficult topography.

Now Anderson Water are preparing to drill to 600m with the rig. “It’s an elephant on a mouses back,” jokes Wiebe about the Multitec 9000.

Although the chassis is small enough to maneuvere in tight spaces, there is a surprising 10 tonnes of pullback on the versatile rotary head allowing for deeper drilling when needed. A hydraulically deployed mast extension also allows 6m lengths of rod to be tripped out which saves considerable time when drilling to depth.

After the current exploration project is complete, Anderson Water Services foresee the rig being used for a variety of work. Water well drilling, the mainstay of their operation, will be a large part of this.

Since it’s launch in 2012, the Multitec 9000 has proven itself to be an excellent water well rig with sales all over the world.

“We’ve sent these rigs to various locations in Africa, to the middle-east, to Indonesia, to the Maldives, to Venezuela to Mexico and to the States among others,” says Dando sales manager Quentin Dulake.

“In Burkina Faso a truck mounted version of this rig has drilled hundreds of holes and already delivered clean water to more than a hundred thousand people,” he estimates.
In Indonesia, the military have received  18 trailer mounted Multitec 9000s exclusively for water well drilling. The rigs will be used as part of the aid and disaster relief programme, providing water to communities in dry areas, and quickly establishing emergency wells following natural disasters such as volcanic eruptions, mudslides and tsunamis – all of which have affected the region recently.

Perhaps the greatest achievement of this rig is its modular design. There are a large number of options including engine choices, rotary head specifications, autmoatic rod loaders, rod racks, extending mast sections, a radio control tracking unit, as well as the option of track, trailer or truck mounted versions.

This gives the user unprecedented control over the specification of the rig and the opportunitiy to tailor the rig to meet project needs and their price range.

“Whatever job comes up first,” he replies. Then, after a moments thought: “We are just about to add the optional SPT hammer, so maybe we’ll send it out on a site investigation project.”

This website uses cookies to improve your experience while you navigate through the website. Out of these, the cookies that are categorized as necessary are stored on your browser as they are essential for the working of basic functionalities of the website. We also use third-party cookies that help us analyze and understand how you use this website. These cookies will be stored in your browser only with your consent. You also have the option to opt-out of these cookies. But opting out of some of these cookies may affect your browsing experience.
Necessary Always Enabled

Any cookies that may not be particularly necessary for the website to function and is used specifically to collect user personal data via analytics, ads, other embedded contents are termed as non-necessary cookies. It is mandatory to procure user consent prior to running these cookies on your website.