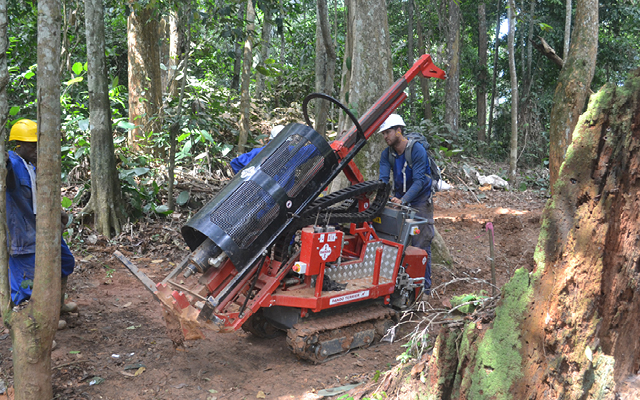 CEO of Dando Drilling International, Martin FitchRoy, summarises a situation faced by many in the business of prospecting for minerals, “ A fully fledged exploration programme has become prohibitively expensive,” he says.

“However, what many prospectors are starting to realise is that they don’t need an operation with large coring rigs requiring high capital outlay and substatial running costs in order to prove the viability of their concession. There are other, low-cost, low-impact solutions for the early stages of exploration. We identified this at Dando and started to prepare a new range of rigs to suit the current prospector’s market.”

When Jon Forster of Kola Gold wanted to expand his exploration area in the Congo and had these very concerns, he found a willing listener in Dando. Forster wanted a small track mounted rig that could perform rotary air blast (RAB) angle-drilling on rugged, rainforest covered slopes.

“A small, versatile rig is sufficient to undertake first pass litho sampling for gold in zones we have previously identified though mapping and soil geochemistry,” he explains.

“The target vertical depth is 10-20m to get below transported colluvial formations or slope debris and tropical weathering profiles, and test the saprock. These shallow bores are enough to garner data on the mineral deposits and justify commencing a larger coring programme at a later date.”

Low-environmental impact was a requisite as Forster wanted to ensure disturbance of the jungle was kept to a minimum during the early stages of the project, and the rig had to be capable of angle drilling between 90 and 45 degrees to suit variations in the angle of the formation.

Fitch-Roy immediately identified the Dando Terrier rig as an ideal solution. At only 780mm wide and mounted on a rubber tracked crawler, the Terrier rig is able to navigate through even tightly spaced vegetation and has very low ground pressure which helps protect the local flora. Using the rotary mast option, rather than the standard percussive drive sampler mast, the rig is capable of open hole drilling with either air or mud as the flushing medium.

To accommodate Forster’s request for angle-drilling, a hydraulic mast dump was added, and to provide air a 400cfm/145psi compressor was mounted on a separate, remote controlled crawler unit.

The Terrier rig has already proven cost effective, and despite the small size of the rig and difficult topographical and geological conditions, the angle-drilling Terrier is achieving up to 65m per 9 hour shift. Kola Gold and Dando are now planning a Mark 2 version with additional modifications to continue the drilling programme in the most difficult to access and steeply sloped parts of the jungle.

Dando Key Accounts Mananger Callum Mee sees the Kola Gold rig as an example of Dando’s position in the drill rig market today, “Business is looking very promising,” he says, “because we took the initiative early on and have exactly the equipment required by the current market: high performing, reliable, low-cost rigs that provide a substantial return on investment.”

This website uses cookies to improve your experience while you navigate through the website. Out of these, the cookies that are categorized as necessary are stored on your browser as they are essential for the working of basic functionalities of the website. We also use third-party cookies that help us analyze and understand how you use this website. These cookies will be stored in your browser only with your consent. You also have the option to opt-out of these cookies. But opting out of some of these cookies may affect your browsing experience.
Necessary Always Enabled
Necessary cookies are absolutely essential for the website to function properly. This category only includes cookies that ensures basic functionalities and security features of the website. These cookies do not store any personal information.
Non-necessary
Any cookies that may not be particularly necessary for the website to function and is used specifically to collect user personal data via analytics, ads, other embedded contents are termed as non-necessary cookies. It is mandatory to procure user consent prior to running these cookies on your website.
SAVE & ACCEPT