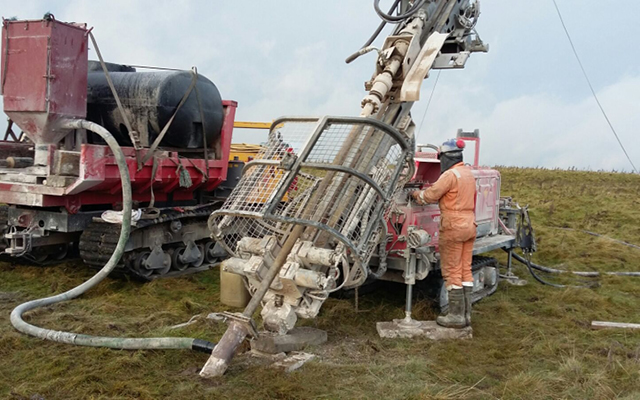 Market pressures in the mineral sector have resulted in innovation at Dando Drilling International and has led to the production of their current best selling exploration rig, the Multitec 4000.

“The Multitec 4000 is the most significant new rig in our mineral exploration range at the moment,” said Dando Sales Director, Quentin Dulake, in a recent discussion about the current needs of customers. “Up until 2012 the majority of our sales to this sector were for our highly-powerful and versatile larger rigs like the Mintec 12.8. With a top-spec rotary head and a 900cfm/350psi compressor on board these rigs are capable of wireline coring, reverse circulation, rotary air-flush and open hole mud rotary operations from a single, large, crawler mounted platform.”

However, in 2012 the market changed significantly. Mineral prices, and especially coal, took a dive, and amid the uncertainties many major miners and contractors sought to freeze capital expenditure. Sales of Dando’s larger rigs began to slow. Exploration, of course, continued to be necessary but the focus changed to obtaining good results while reducing initial outlay and running costs. At this moment in time, Dulake reports, the small footprint, track mounted Multitec 4000 caught the attention of the market.

“Our customers saw the Multitec 4000 as an opportunity to continue drilling while maintaining profit margins that had suffered due to mineral market conditions,” he explained. Capable of the full range of mineral exploration drilling techniques with penetration rates for wireline coring and open hole boring that matched much larger, more expensive equipment, the rig was a cost effective solution to demanding mineral exploration programmes, but at a much lower price point.

After its launch in 2015, interest and sales for the Multitec 4000 immediately took off in the mineral exploration sector with international sales across Africa and South America for a range of mineral targets. The response from customers was positive with several key benefits quickly emerging. Among these, the small footprint of the rig, at only 1.4m when tracking, allowed access to forested or jungle environments with minimum disruption to flora. While able to load 3m rods, the mast extension allowed tripping of 6m lengths expediting a change of tooling or redeployment to a new drill pad. Efficient engine sizes coupled with small but powerful rotary heads meant that customers were experiencing large reductions in fuel usage with some reporting consumption as low as 5 litres per hour while meeting or exceeding target penetration rates.

Strong customer relationships and feedback have played a key role in ensuring the development of the Multitec 4000. One such customer is UK based Hughes Exploration and Environmental Drilling. With a diverse fleet of drill rigs catering to exploration drilling as well as units for water well, geothermal and sonic applications, they were looking for a rig to drill hard rock quarries around the UK and decided a Multitec 4000 would meet their requirements. The rig was set to work immediately using N-Wireline and H-Wireline coring on a range of targets from dolorites to limestone.

Purchased to replace two older rigs in his fleet, owner Martin Hughes reported that the Multitec 4000 has “done everything that we have asked of it,” drilling in the 80-180m range. “The rig is already programmed on a number of exploration contracts”, continued Hughes,  “including  H and P wireline, drilling both vertical and inclined boreholes, along with domestic GSHP and water borehole projects between jobs.” The proximity of such an exploration company to the Dando factory and the experience of Hughes, who has run the company for over 30 years, ensured direct and valuable feedback to Dando engineers and led to refinements in his own rig which have been implemented directly into new models.

With increasing demand for the rig globally it quickly became apparent that, while a multipurpose machine the Multitec 4000 was filling a niche in the market for mineral exploration. In particular, a number of sales to customers drilling in equatorial jungle regions with difficult terrain and limited access along narrow tracks and between trees spurred the design team to focus on producing a fully-fledged exploration version of the rig.

“Although we  knew the Multitec 4000 was an exciting new product in the market, the level of adoption from the mineral sector was probably greater than we had anticipated,” explained Dulake. “With enthusiastic reports from existing and new customers, and plenty of feedback, our design team had a very strong picture of an ideal version.”

Rupert Coler, design engineer at Dando, illustrates the criteria for the new model: “The Multitec 4000 was frequently being used in uneven, sometimes steep, forested terrain with muddy, sticky or slippery surface conditions. Our first target was to ensure the rig could navigate this kind of terrain quickly and with maximum safety to the operator.” As a result, the Dando engineers focussed on designing the chassis and component layout of the Mulitec 4000 Mk3 to achieve a low and central centre of gravity.

Wider 400mm tracks were selected rather than the standard  300mm versions, with options including steel single-bar grousers to provide good clearance of mud in wet environments, or rubber tracks for gentler surfaces. The track- base was also widened slightly to 1.55m which increased the tilt angle of the rig markedly with a view to increasing safety while traversing slopes or other uneven terrain. A high-power hydraulic climbing winch was designed-in as an option to provide additional security when navigating steep and muddy terrain.

In standard form, the rig is supplied with a 75Hp Tier 4 Final engine to meet regulations in European and North American markets, and a 111Hp Tier 3 has been chosen for the rest of the world, although other options are available. With the majority of customers exploring to depths in the 50-250m range and in core sizes between N and P, the compact but powerful RH6 rotary head usually used on the larger Multitec 9000 rig was selected as a high-performance option. To ensure sufficient oil was supplied to the 6000Nm/750rpm head and uprated-crawler motors, a high efficiency hydraulics system was designed by UK based Hydraulic Alliance around Bosch-Rexroth pumps and motors.

The mast has a 3.6m working stroke with a deployable mast extension to allow two rods to be pulled at a time. The folding mast extension ensures that when tracking the mass is kept firmly at the middle of the rig providing a stable base. Double acting hydraulic break-out clamps at the foot of the mast make and break joints while an integrated soft coupling ensures the longevity of wireline rods and sub adapter threads.

A new console has been designed on a swing arm so the driller can choose a position that affords him the clearest and safest view of the borehole. With safety being taken seriously not only in the west but increasingly in the developing world, the rig conforms to all new UK and EU regulations and standards such as EN16228. Opening guards leads to an immediate decrease in rotation speed and power units meet rigorous emissions standards and have noise attenuated canopies. For the most difficult terrain, a robust radio remote control option enables the machine to crawl up steep inclines in muddy and slippery conditions with complete safety to the operator.

Dulake believes the New Multitec 4000 is going to capture the market for versatile, powerful, ultra-compact exploration rigs: “The mineral market is beginning to show signs of revival and we are receiving a stream of enquiries for the rig. We currently have three in build, two for coring and one for reverse circulation drilling with an accompanying track mounted compressor, and our sales figures show it is our best-selling rig over the last 6 months with a number of sales already confirmed for the coming year. In response, we’ve added the model to our forecast build schedule in order to keep lead-times down and match the demand.” Video: Multitec 4000 Coring in the UK

This website uses cookies to improve your experience while you navigate through the website. Out of these, the cookies that are categorized as necessary are stored on your browser as they are essential for the working of basic functionalities of the website. We also use third-party cookies that help us analyze and understand how you use this website. These cookies will be stored in your browser only with your consent. You also have the option to opt-out of these cookies. But opting out of some of these cookies may affect your browsing experience.
Necessary Always Enabled

Any cookies that may not be particularly necessary for the website to function and is used specifically to collect user personal data via analytics, ads, other embedded contents are termed as non-necessary cookies. It is mandatory to procure user consent prior to running these cookies on your website.